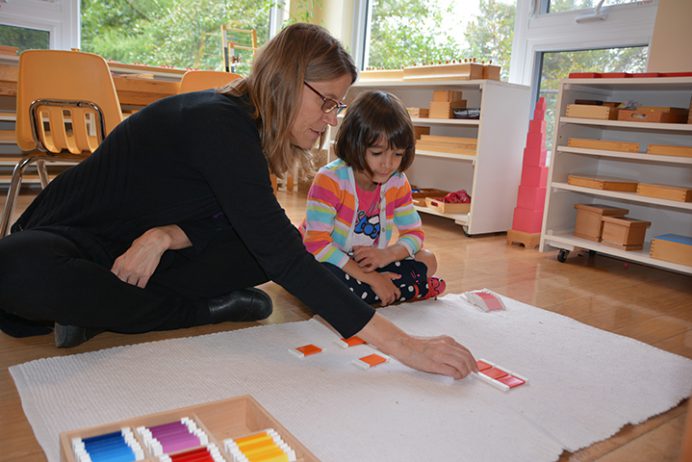 Husband-and-wife team, Claude Flight and Sandrine Flight are the two founders and owners of Parkdale Montessori School. They currently lead a team of 20 people, who are professionally Montessori-trained head teachers, assistants, and devoted support staff.

Sandrine Flight, B.A., M.Ed., AMI. Sandrine was born in Belgium and spent her childhood in both Belgium and France. She holds a Bachelor of Arts in Linguistics and Applied Language Studies, and Film Studies from Carleton University in Ottawa. She received her AMI (Association Montessori Internationale) diploma at the Casa level from the Foundation for Montessori Education, Toronto. She also holds a Master’s Degree in Education (Montessori concentration) from Loyola University, Maryland. Sandrine has been working in Montessori for over 20 years and taught in schools in both Toronto and Ottawa. She is a member of AMI Canada.

Claude Flight, B.A., B.Sc., M.A., PMP. Claude is originally from Newfoundland. Prior to opening Parkdale Montessori School, Claude spent his working career in Project Management and Marketing for 25 years. He obtained his undergraduate degrees and Masters of Arts from Memorial University of Newfoundland, while his Master’s in Project Management is from George Washington University and Université du Québec. Claude also holds a Certificate in Criminology. Claude offers consulting services and has lectured at The Montessori Foundation international conference. Claude is also a children’s book author and most recently published “Sally’s Stomach”.

Jasmine Steadman, DCS, CRLA tutoring diploma, MEY assistant diploma. Jasmine was born and raised in Quebec. Jasmine graduated from Heritage College with a DCS in Office System Technology, specialization in Micro-publishing and Hypermedia, and a CRLA Regular Tutoring Certificate. Jasmine worked for the government of Canada and in management within the service industry but decided, after discovering the Montessori philosophy, to pursue a career with children. She obtained a Montessori Assistant certificate. Jasmine worked for many years in Toddler, Casa and Elementary classrooms prior to accepting the position of School Supervisor.

Rebecca Schwartz, B.A, B.Ed, MEY. Rebecca grew up in the small town of Almonte just outside of Ottawa, where she always knew she wanted to be involved with educating children later in life. She graduated from University of Ottawa with a double major in English Literature and Psychology, and later went on to complete her B.Ed at the Primary/Junior level. She also has a Montessori Early Years certificate, obtained in Ottawa. After being a Casa Assistant for a few years, Rebecca spent a year in the position of School Administrator, covering a staff maternity leave. She has since taken on the role of Finance Manager and remains part of the administration team while working with children at the Casa level.

Ms. Danielle, B.A., ECE, AMI. Danielle is originally from New Brunswick and graduated from the Université de Moncton with a Bachelor in Fine Arts Education in 1995. After a few years teaching in the public school system, she moved to Vancouver to obtain her diploma at the Casa level and her ECE certificate at the Montessori Training Center of British Columbia in 2001. She has worked as a Head Teacher in Vancouver and in the Ottawa area ever since, and has taught in both English and French. Danielle is an active member of AMI Canada, participating in local, national and international refresher courses, workshops and conferences.

All Head Teachers have Montessori certifications qualifying them to teach at either the Toddler, Casa or Elementary level. They also hold undergraduate degrees, as well some hold an Early Childhood Education diploma.

Ms. Elizabeth, AMI, ECE. Elizabeth studied Early Childhood Education at Algonquin College during the mid-90’s. It was there that she discovered her new calling, Montessori. Elizabeth went on to work as an assistant in a Montessori school in Orleans in 2004 and by 2006 had earned her AMI Montessori Primary Teacher Diploma. Elizabeth has been working as a Head Teacher in a bilingual environment ever since. She has embraced Montessori as a life-long passion and builds her craft on a daily basis. She is a member of AMI Canada.

Ms. Jessica, B.A, DSW diploma, Montessori diplomas. Jessica graduated from Ottawa University with a Bachelor of Arts in Sociology. She then went on to graduate with Honours in the Development Services Worker program at Algonquin College before deciding to pursue her career in Montessori. Jessica holds a Montessori certificate at both the Casa and Elementary levels. Jessica has been working in the education field for almost 20 years. She has worked with children with special needs, and has taught in English and French in the Toddler, Casa and Elementary programs. She is a member of AMI Canada.

Assistants hold undergraduate degrees or are in the process of completing their degree. They also either have a Montessori certificate and/or Early Childhood Education diploma, or previous experience working in Montessori.